On Friday, February 21, University Prep Graduate Jamal Pogues will be fighting for the LFA  Light Heavyweight Title. Pogues (7-2) will be facing undefeated fighter Alex Polizzi. Polizzi was a three- time NCAA Division 1 national qualifier in wrestler at Northwestern University and has earned an undefeated 5-0 mma record. Pogues last fight was on the Dana White’s Contender Series back on August 20, 2019. Pogues won his fight via three round unanimous decision against another undefeated (11-0) and a top Brazilian prospect, Marcus Brigagao. All three judges scored the bout 30-27. The Dana White’s Contender Series is a TV show featuring five fights in each episode. At the completion of each episode, fighters can be chosen by Dana White to receive a UFC contract.  Although White was impressed by Pogues performance, he didn’t receive the contract. White, however, commented, “This kid (Jamal) looked good. He’s 7-2, he is with a great team, and when you look at this guy, he has all the tools. He has everything it takes to be good and make it to the UFC.” White continued saying, “He needs more time, he is with a great team Joe ”Daddy” Stevenson knows what it takes to get into the UFC.” This past December, Pogues got the call to fight for the LFA title, opening up the opportunity for him to gain more experience and hopefully a chance at signing a UFC contract.  Pogues will be representing Cobra Kai in Victorville.

The fight will be held at Mystic Lake Casino Hotel in Prior Lake, Minnesota and can be seen on UFC Fight Pass at 6:00 p.m. 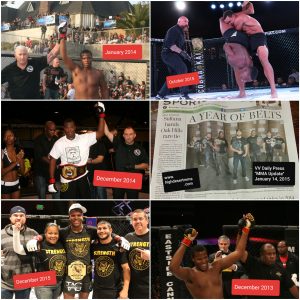 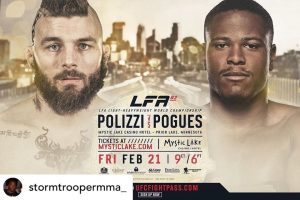